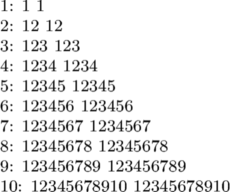 Both \recurselevel and \recursedepth are macros. The real counters are hidden from the user because we don't want any interference.