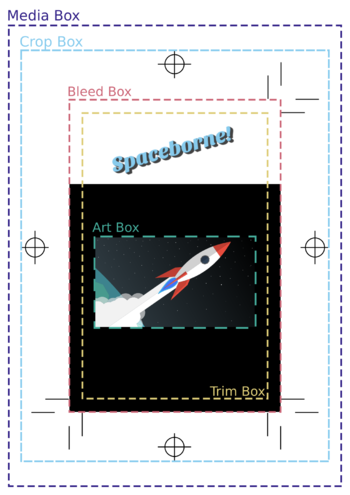 While PostScript (and EPS, that is) knows only one kind of page size, defined by the BoundingBox (or HiResBoundingBox), the size of PDF pages can have different meanings – e.g. the visible page, the printed page, the cropped printed page. Therefore the PDF standard defines a set of "boxes":

In PDF/X, if ArtBox is defined at all, it must not differ from TrimBox.

End of August 2015 ConTeXt got the necessary setup keys to define these boxes (minimal example by Hans):

The auto option only works with layout=middle (message otherwise). The offset are accumulative (so crop < trim < bleed).

The default CropBox and TrimBox handling is unchanged, so one really needs to set this when it's needed. The already present interactionscreen cropping is unchanged.

ConTeXt doesn’t set ArtBox at the moment, since nobody seems to need it.

In a thread on tex.stackexchange.com from 2017-05, there are few clarifications by user Marcus C., to be integrated here:

So, here's the complete MWE, just in case anybody else needs it:

Except for the missing BleedBox, the resulting PDF file is now equivalent to the one created by InDesign.